The Franco Zeffirelli International Centre for the Performing Arts is located in the San Firenze Complex, the former courthouse and judiciary offices now located at the Palazzo di Giustizia in Novoli.
The San Firenze Complex, located in the piazza of the same name and among the few examples of Late-Baroque architecture in the city, was built by the Padri Filippini in honour of Saint Phillip Neri, founder of the Order and Florentine in origin. In 1645, the fathers entrusted the project to Pietro da Cortona, benefitting from the bequest left by Giuliano Serragli, the last descendant of an important family in the city.
His noble family crest crowns the top of the façade, amid allegorical statues sculpted by Pompilio Sticciati – the originals in pietra serena, today substituted with copies, are located in the Museo di Firenze. He was also the artist of the statues with Prayer and Humility, located on the tympanum of the door to the Oratory.
In 1667, Pier Francesco Silvani launched the construction of the church and, in 1715, Ferdinando Ruggieri replaced him, who finished the façade in pietra forte. In 1772, Zanobi Del Rosso, already busy working beside Giovanni Filippo Ciocchi on the construction of the convent, designed the Oratory, joining it with the church and the rest of the building.
The sculptor Giovacchino Fortini, called to oversee the interior decoration of the church, continuing the work of Giovanni Battista Foggini, is behind the preparatory plaster models for the marble low-reliefs depicting St. Philip Neri Reviving Paolo Massimo and St. Philip Neri Curing Pope Clement VIII Aldobrandini from Gout (1714-18), which are kept in the atrium of
the San Firenze Complex, together with two low-reliefs by Antonio Montauti showing St. Philip Neri Selling his Books and Giving Money to the Poor and St. Philip Neri Receiving the Holy Spirit. Fortini is also attributed with the sculptural group depicting Faith and Hope located above the tympanum of the door (1736).
With a lease below market price, which will last 29 years, the City of Florence granted the nonprofit Fondazione Zeffirelli the use of the ground and first floors for the Centre, with a restriction of 120 days per year for the availability of the Music Room. 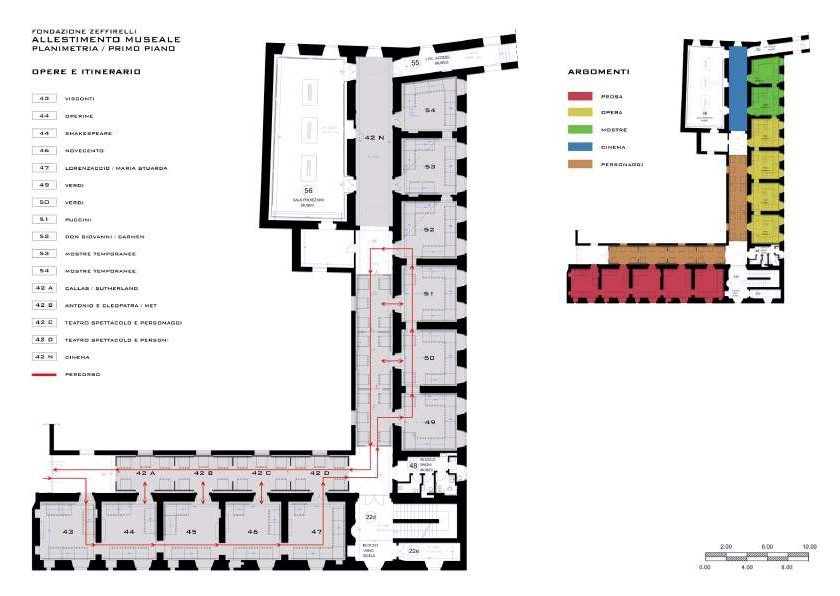 The Music Room is located on the Centre’s ground floor; originally the Oratory of the Padri Filippini Complex.
The room vaunts a cross vault ceiling adorned with the Assumption of Mary by Giuliano Traballesi (1775) and is surrounded by platforms in the exedras and along the side walls, once used to sing praises.
In addition to projections about the Museum’s various exhibitions, the Music Room will offer regular chamber music concerts, showcase films about classic plays and hold themed events.
The room has 120 seats and a maximum capacity of 150. The general public can purchase tickets to attend concerts and films.

The Foundation’s Library, consisting of approximately 10,000 books about art, theatre, costume, cinema and fashion, as well as a sizeable collection of periodicals, is open free of charge to the public.
The books have been catalogued and positioned according to the division of themes decided by Franco Zeffirelli, in addition to facilitating browsing by the public. The materials will be catalogued according to international standards and guidelines, and the catalogue will be available online.

The documents housed in the Archive cover the Maestro Franco Zeffirelli’s entire career. Every play and film is broadly documented by a range of different materials concerning the development of each project, ranging from the preparatory stages to iconographic sources, character creation, screenplays, director’s notes, sets and costumes, as well as photographs of
theatrical scenes and film and television productions.
Recordings of performances are also kept in the archive, in addition to advertising materials, merchandising given out during previews, and Italian and international press clippings. The Archive also includes documentation about uncompleted projects.
The Archive’s documents, which have already undergone a preliminary cataloguing (conducted to enable information to be recovered ahead of definitive cataloguing), will be subject to complete archiving and digitalizing process, from the standpoint of suitable conservation, interoperability and sharing. The wording of the descriptions will be researched and uniformed for use by non-experts to guarantee greater access for scholars and non-specialists.
The Archive is comprised of:

The Archive is open to the public upon appointment.

Directed by Annamaria Tossani and her daughter Ludovica Santedicola, welcome guests into an indoor room and into the dehors of the courtyard of Palazzo San Firenze. The opening times are the same of the Foundation. The tea room, bar & restaurant can be accessed when the Centre is open.

The Museum, under the aegis of Maestro Franco Zeffirelli, is home to a permanent exhibition of his works and temporary exhibitions of his sets or artistic and historical foundations on which his staging was set, from the Renaissance to modern and contemporary times. The Museum is open to the public from 10am to 6pm, Monday to Friday. Closed Tuesdays.

The Bookshop includes a section dedicated to the Maestro Franco Zeffirelli (Books and DVD), the history of the theatre, Opera, Cinema, Arts and editions of the Foundation in course of publication.